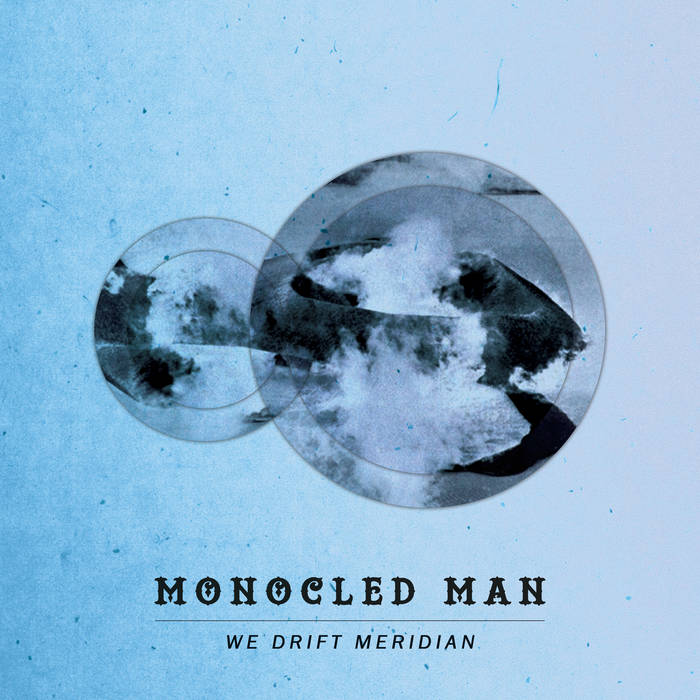 You wouldn’t even know they were there… but the minute islands and atolls amidst the vastness of our world’s oceans provide intriguing inspiration for Monocled Man’s second album, We Drift Meridian – a concept devised by trumpeter, multi-instrumentalist and composer Rory Simmons. With established colleagues Chris Montague (electric guitar) and Jon Scott (drums/electronics), plus vocal contributions from Emilia Mårtensson and Ed Begley, Simmons layers-up haunting electronic and acoustic soundscapes which reflect the remoteness and sometimes curious histories and characters associated with these far-flung, isolated spaces.

Monocled Man’s ethos of through-composition and open improvisation is carried over from their debut release on Whirlwind, Southern Drawl – but here, a distinctive new dimension is introduced, emanating from Simmons’ predetermined, home-studio-produced sonic environments. Cinematic beds of sound, carefully crafted with modular synths, sequencers and chopped audio, are all fashioned into an expansive framework which provides a springboard for individual artistry. Chris Montague’s characteristically oblique guitar style and Jon Scott’s hard-hitting, sparky drumming – both of which are unwaveringly inventive – join with Simmons’ plaintive trumpet in generating these appropriately drifting, searching panoramas. But, far away from ambient lifelessness, this is a creative band whose energy also frequently crackles with filmic urgency as pulsating, electronic textures erupt into industrial, post-prog fervor.

'Tromelin' (a small, uninhabited sandbank island in the Indian Ocean, east of Madagascar, with a history of shipwrecks and abandoned slaves) is depicted by electronic call signs, dramatic percussion and forlorn trumpet riffs, whilst 'Deception Island' (a natural harbour in the South Pacific Ocean whose early 20th century whaling history saw hundreds of men accommodated there) bubbles with electronic vigor and Ed Begley’s punky vocals; and 'Marie Betsy' (a Deception resident who was the first female ever to be in Antarctica) is portrayed through reverberating swathes of electronics and Montague’s clanging, countrified guitar.

Title song 'We Drift Meridian' features the lucid vocals of Emilia Mårtensson, expressing Simmons’ lyrics of isolation with an almost disturbing, empty realism; and 'Mount Terror' (referring to HMS Terror – one of two of Her Majesty’s ships lost off Canada following an abandoned 19th century expedition, but rediscovered as recently as 2014) skitters intensely to Scott’s vital rhythms before becoming submerged by weary, mournful electronics. 'Mount Cerberus' and 'Queen Tirza', too, perpetuate the pervading themes of loneliness and despair as Simmons’ trumpet improvises freely across fluctuating, anguished audio collages.

One of the most eery island tales – interpreted in both Scott Moorman Adrift and Fiction Afloat – recalls when a 17ft whaler, with a crew of five, went missing off Hawaii. Several years later, a small, Hawaii-registered boat was discovered on atoll Taongi, 2,000 miles away… and a shallow grave alongide revealed a human jawbone which was matched to crew member Scott Moorman’s dental records. Such bizarre, aching hopelessness is represented by chiming repetition, seabird-calling trumpet and, later, Mårtensson’s and Begley’s intertwined vocals which speak of history becoming immortalised in stories.

Known widely for his contribution to the UK and international jazz scenes, Rory Simmons’ approach to Monocled Man expresses the broader palette of music which currently inspires him; and We Drift Meridian embraces conceptual cohesiveness through textures and lyrics which evoke mystery, solitude and even desperation. As Simmons confirms: “These are instrumental and electronic explorations which have a meaning and, in context, hang together musically – it’s an exciting, natural progression of the band.”

"​The album achieves an impressive unity and coherence in sound​... ​A work where attention to detail in sound design is as important as individual improvisatory contributions or compositional approaches to harmony and rhythm."
★★★★ Music OMH

“A fascinating mix of jazz, electronic music, improvised music… It’s really quite uncategorisable this and I think if you’re someone who’s interested in music that has many different layers and complexities to it but is also just a fabulous listen from beginning to end then you’re going to absolutely love this.”
Jamie Cullum, BBC Radio 2

"The overall effect of this intriguing album is one of sonic fascination."
All About Jazz

"It drifts, continuously, fluidly, yet is forever rooted, forever in thrall to the meridian."
Clash Music

"Twisted brass and off-kilter percussion make it a revelation in nu-jazz."
High Violet

"​A​n intriguing album​... Full marks to Simmons for coming up with something original and distinctive​."
The Jazz Mann

"A lively listen... A strong evocation of strange places."
The Jazz Breakfast