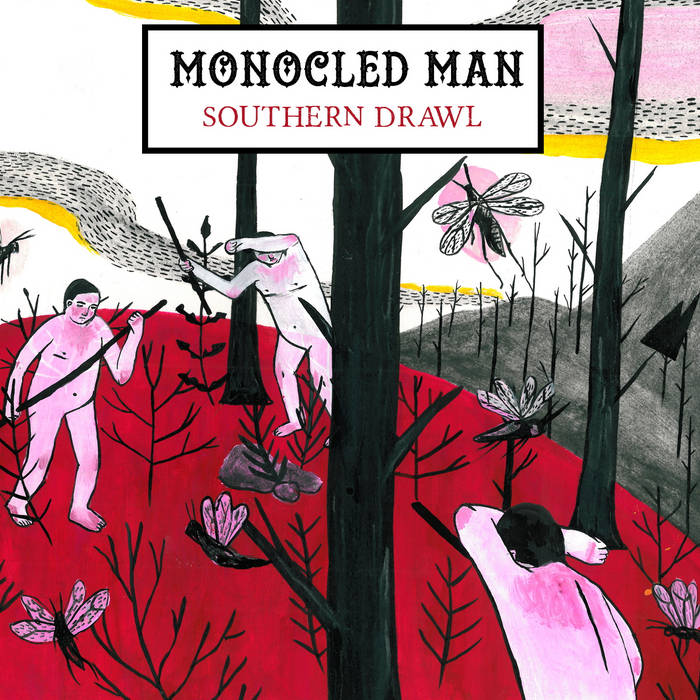 Southern Drawl is the debut album from Monocled Man, the brainchild of trumpeter, composer & producer Rory Simmons, a notable member of the UK's new wave of post-jazz improvising musicians. A trio consisting of Simmons on trumpet, Chris Montague on guitars and Jon Scott on drums, Monocled Man's music features unabashed raw energy, an eclectic mix of genres and vigorous yet accessible compositions. They're known for exploring music in inventive ways as sidemen with many heralded contemporary British bands and use their experience to make Southern Drawl a unique album, representing some of the best in what's happening on the UK's new music landscape.

Much of Monocled Man's music is inspired by the contemporary explorations of the New York City Downtown scene, including Tim Berne, Jim Black and Craig Taborn, with sonic influences from David Torn, Cuong Vu and The Chicago Underground Ensemble. And in London where the trio is based influence is found in the output from the forward-thinking Loop Collective (Simmons is a founding member) as well as music made by Chris Batchelor, Liam Noble and Julian Argüelles.

Southern Drawl lays spiraling post rock inspired riffs over soaring brass lines and saturated guitars. Hypnotic guitar loops evolve out of through-composed knotty melodic lines and polyphonic writing; rumbling free drums with loose trumpet improv bristles over the top of the energy created between Chris Montague and Jon Scott. Simmons’ trumpet playing lurches between sweet, almost Arve Henriksen moments to the wilder improv of contemporary players like Ralph Alessi and Herb Robertson, while even invoking the delayed soaked psychedelia of 70’s Miles Davis. Chris Monatgue’s post-Krantz driven sound, with influences of Marc Ducret and David Torn, brings elements of acid country, skronk and noise improv. Enveloping the ensemble with intricate but driving poly-rhythm and multi-layered texture is Jon Scott, one of the UK's in-demand young drummers. Playful percussive moments give way to thrashing grooves at the next, propelling the energy of the trio throughout the record.

This album is lit with colors of layered synths and processed audio from the sessions, skillfully edited and produced by Simmons. Filtered drums fly across the stereo image while de-tuned brass chords throb under moments of hi-octane noise. An array of analog keyboards paired with stretched audio give this album a panorama of high energy contemporary jazz and rock improv, soaked with a post-produced kaleidoscopic landscape that assures Monocled Man is a unique and exciting addition on the European new-music scene.

"An album that is a serious listen, further evidence that Simmons can be counted as one of the most creative trumpeters on the UK jazz scene at the moment with ideas to burn firing us all up."
★★★★ Marlbank

"The verve and raw energy of Monocled Man is addictive, especially from a trio (Troyka and Partikel fans are sure to find the rough-hewn vitality here very attractive), and the prospect of live extemporization is definitely something to look out for. An absorbing 9-track, 45-minute playlist (all composed by Simmons) which is as full-bodied as it is exciting."
AP Reviews

"The feeling is very much of a live session, with Montague's choppy riffing integrating well with Scott's urgent drumming on up-tempo numbers such as Bullet Nose, and the three players building atmosphere very effectively together on Scribbles. Fans of Red-era King Crimson and recent developments in Scandinavian jazz, will find much to enjoy in Monocled Man's blend of rugged interplay and melodic soul-searching."
The Herald Scotland

"[Simmon is] a long-lined improviser with a big vocabulary, and Chris Montague's sound-palette extends a long way above and below linear guitar breaks. It's very accomplished and often exciting."
The Guardian

"At times fascinatingly challenging, unsettling and emotional, this album is an emotive piece of composition which gives these three musicians an opportunity to improvise and combine in an exciting new format."
London Jazz